Andy Murray, former world #1 in ATP men's singles tennis, is one of the most prominent athletes to have undergone hip resurfacing surgery in recent years. Because of this hip resurfacing has been brought into the spotlight and many people, both patients and sports fans, are eager for more information about the procedure. Many patients with hip arthritis have questions about whether or not they are candidates for this type of operation. Additionally, people want to know the difference between hip resurfacing and traditional total hip replacement, and how Andy Murray has been able to return to such a high level of performance so quickly...following is a list of some commonly asked questions.

What led Andy Murray to develop a condition that required hip resurfacing surgery at such a young age?

Information about Andy Murray's hip condition, available from interviews on the topic, suggest that he has dealt with the issue "for a very long time". This likely indicates a structural issue within the hip joint that placed higher stresses on the cartilage. Furthermore, tennis is a sport that involves a lot of pivoting, twisting, and repetitive sprinting, all of which involve use of the hip joint.

A predisposing structural issue of the bone, combined with the wear and tear of a vigorous athletic activity, combined to cause premature wear in the joint that led to an arthritic condition. This is a common scenario amongst professional athletes.

What exactly is hip resurfacing?

Hip resurfacing is an alternative procedure to a total hip replacement (THR), that creates new artificial surfaces for the ball and socket. It is an open (not arthroscopic) procedure that involves reshaping the bone of the ball (femoral head) and the socket (acetabulum), to accept 2 new metal implants that will function as the new joint surfaces. Often it is called "Birmingham Hip Resurfacing", after the named implant that was developed in Birmingham, England in the 1990's. 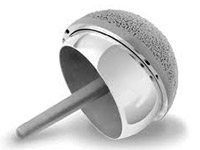 What makes Andy Murray a good candidate for hip resurfacing?

The factors that make Andy Murray an excellent candidate for hip resurfacing are that he is a young man with a large bone size (given his height and skeletal frame), has good bone quality (from regular impact sports), and has a high activity level that will take advantage of hip resurfacing. In research studies over the last 15 years, men under the age of 65 years, with primary osteoarthritis of the hip and good structural integrity of the hip bones, have had the best results.

I saw that Andy Murray had an operation prior to hip resurfacing, what was that for?

In 2018, Andy Murray had arthroscopic hip surgery in Australia. Very likely he already had deterioration of the joint cartilage and labrum surrounding the hip joint; an arthroscopic procedure was likely an attempt to "clean up" the joint and labral damage. Unfortunately the results are not generally successful when there is substantial cartilage loss, as hip arthroscopy cannot replenish the damaged cartilage. Once the deterioration in the joint reaches a certain level, only artificial implants will solve the problem.

How did Andy Murray come to the decision that resurfacing was his best option?

Andy Murray watched closely as Bob Bryan, a member of the most successful doubles team in tennis history, recovered from hip resurfacing surgery performed in August 2018. Bob Bryan had a similar condition in his hip, as do many athletes, and recovered well enough to return to professional tennis in 5 months -- the first professional tennis player to do so! As Bob's recovery continued to gain momentum in 2019, he found Andy Murray eagerly asking about his surgical procedure. During the 2019 Australian Open, they had many conversations about hip resurfacing as a possible treatment for Andy's condition, and as a possible way to extend his tennis career.

Ultimately, the decision to undergo another operation came down to Andy's daily quality of life. He had severe enough symptoms in his arthritic hip that he would feel limited on a regular basis. While he always harbored some desire to return to playing competitive tennis, Andy would have been satisfied with the pain relief provided by hip resurfacing.

Given Andy's young age (only 31 at the time of surgery), hip resurfacing was a better option than THR because of the preservation of bone. Also, given that playing competitive tennis was in the back of his mind, hip resurfacing was the best option to allow that return to such an elite athletic level. I put Andy in touch with several of my other patients who were able to return to elite-level sports...Ed Jovanovski, who was able to return to professional hockey; Tiago Splitter, who returned to the NBA as a basketball center; and David Jones, an ultramarathoner who has won his age division in the Badwater 135 mile race!

Are there risks of hip resurfacing that are different than with total hip replacement?

Yes, because of shape of the implant and preservation of bone, currently the only material used in hip resurfacing implants is a cobalt-chromium metal alloy. Both the ball and socket are metal, creating a metal-on-metal articulation. While this material is very smooth and durable in the laboratory and in hip simulator machines, it was only after these implants were placed within the human body that we realized that some patients can have reactions to the materials. The metal-on-metal surfaces create microscopic metal debris, which can cause an allergic reaction in some patients. Unfortunately the only solution for this problem is to remove the implants and perform a total hip replacement using different materials. The risk of this happening in a man is estimated to be less than 1%.

The metal debris also is able to dissolve into solution and make its way into the bloodstream, where it is filtered through the kidneys. With healthy kidney function and a well-functioning hip resurfacing, the levels of cobalt and chromium are in the single digit parts per billion range. At these levels, which should be monitored periodically with a blood test, there does not seem to be any harm to the body.

A total hip replacement has other materials such as ceramic and polyethylene that can be used, and thus does not have this risk.

Would he be able to achieve the same level of activity with a total hip replacement?

This is a good question that is unable to be answered scientifically, because it has never been done before! My feeling is that while total hip patients are able to achieve a high level of activity, it is still lower than the potential of a hip resurfacing patient. The ball size is much larger, and I believe the loading of the femoral bone is more physiologic with a hip resurfacing implant; thus I think with an sport like tennis, a hip resurfacing is more likely to allow the quick movements and sprinting activity. Since the hip resurfacing is more stable than a THR, I believe patients can move more freely without the worry of dislocation.

Was there any assurance that Andy Murray would be able to return to competitive tennis?

There was certainly no guarantee that he was going to be able to reach the same level of tennis that he had achieved before, particularly with regards to movement, explosiveness, and endurance. However, the fact that he was still playing at a very high level of tennis with a problematic and painful hip gives confidence to the belief he would be able to do it with a pain-free and more mobile hip.

Certainly there is a lot of rehabilitation after a surgical procedure such as hip resurfacing. Andy Murray is one of the hardest working, most dedicated athletes ever! So, if anyone was going to be able to accomplish this feat, it would have been Andy Murray. Also, Bob Bryan showed us that a return to professional tennis was possible with doubles. Of course, singles is a more intense activity than doubles, but when I asked Bob if he thought he could play singles, he said he didn't see any reason that he couldn't!

How did Andy Murray make such a quick return to competitive tennis?

After surgery, the recovery progresses in phases. The first phase is normalization of the gait...Andy had walked with a limp for a couple of years, as a protective and compensatory mechanism. Once the body realizes that there isn't any pain with putting weight on the hip any longer, then the muscles can function properly and strengthen. This normalization of the gait typically takes 1-3 months.

The second phase of recovery is regaining range of motion. With an arthritic hip, the joint loses motion because of bone spurs and soft-tissue contractures. With the resurfaced hip, the joint surfaces are smooth and the bone spurs are removed, so there is no longer a blockage to motion. However, the soft-tissues and muscles have "memory", so much of the rehabilitation involves stretching these soft-tissues to allow for motion.

The final phase of recovery is muscle strengthening. This is what takes the longest and never really stops. The gluteal muscles, quads, and hamstrings are the most affected by the arthritic condition and the surgery, so need the most attention afterwards. To regain the explosiveness required for competitive sport, in my experience, takes 6 to 8 months, and really can only occur with the actual activity. Once the muscles are stimulated by the activity, the muscle development continues. 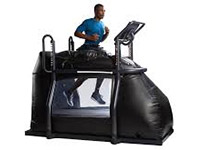 Typically, for the implant to become solidly attached, and for healing of the bone around the implant, 6 months is recommended. With professional athletes, I have developed a rehabilitation program using an anti-gravity treadmill (shown below), which allows a patient to institute some of the impact activities at an earlier stage.

How long will the resurfacing implant last?

It is impossible to predict how long an implant will last in the body...there are now research studies where, in the best patients for the procedure, hip resurfacing has a greater than 90% chance of lasting 15 years. This is comparable to total hip replacements, with the added benefit of preserving bone and a higher activity level.

There haven't been enough studies to see whether or not activity would reduce the longevity of the implant, but in my experience, I haven't seen a high activity level be responsible for an earlier or higher failure rate.